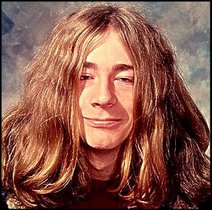 1970–1975: Publication of diverse magazines, such as 'Drifdlav' and 'Phlegm', an amalgam of various cartoons and comic strips.

Founding member of progressive rock groups such as  Zak & Boebbel , Vetbult and Fum.

Solo performances as Boebbel with avantgarde comedy shows, such as  'The Flying Turd'  .

Founding member of the classical guitar trio  The Friends of D Major .

Publication of  'Boebbeltje', a magazine with short stories, special cryptic crosswords called boebbelograms,  limericks, fictional interviews, pseudo-scientific articles, drawings and comic strips such as 'The Beernoses on the Warpath' .

Creation of various plays, such as 'TutAnkhAmenn and Hamledt in Antwerp'.

1980–1990: Founding member and composer of jazzrock bands Psychotone and Psychotone Too .

Composer and arranger of music for various music ensembles and for classical guitar.

Construction of his percussion stand, the  Klopmöbel  .

Construction of bizarre musical instruments, such as the  boebbelophone .

Creation of game shows, such as the  'Neanderthal Contest' .

Creation of educational games, such as the  'European Art Game' .

Encyclopedic observation of  'The Planet Mehlodia and its Inhabitants' .

2005:  A documentary on the life and works of Ribley! was made by the Belgian film director Paul Smets, entitled  'Ribley! , Assemblage Sculptor' .

2008: Concept, design and construction of his Humoristic Assemblage Halls of Art .

The early works of Ribley! were mainly created under the name of Boebbel .

Boebbel published in various magazines a lot of word games, crosswords and cryptograms, often with a humorous bias.  Very special were his boebbelograms , a sort of cryptograms with selfmade neologisms.

Boebbel has always been a passionate chess problem solver, and he composed and published a lot of chess problems himself, a lot of them with a jocular bias.  He also invented new fairy items in fairy chess, such as The Magician , The Hulk , Melodic Chess , and Copulation Chess …

Boebbel also created a couple of funny yet very educational games, of which the 'European Art Game' (Europees Kunstspel) is the best known. The purpose of this board game is to build up a collection of various works of art, but the money that the players need has to be earned on a special job circuit or with additional tasks. 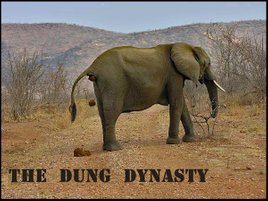 Boebbel created game shows and contests, but he focused on dexterity and sensory perceptions rather than on pure knowledge; he aimed at well-founded entertainment and collective fun rather than selective competition.

The most famous of his contests was without doubt the ‘ Neanderthal Contest ‘ , in which the candidates needed to display neanderthal skills to win the contest rather than modern man intelligence.

Boebbel wrote scenarios and scripts for short films and videoclips , but none of them were filmed due to the lack of financial resources or sponsoring.

They are kept in the  ‘ Boebblywood Film Archives ‘ .

Most memorable was the videoclip ‘ Cantata for Sadomasochistic Scream Quartet with Red-hot Irons, Bricks and Razor Blades ‘ .

Boebbel though was best known  for his LITERATURE and  for his MUSIC . 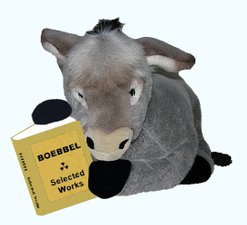 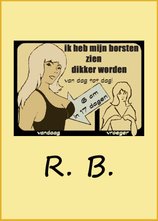 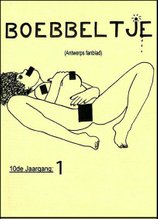 When he was still a child, Boebbel already used to make persiflating scrapbooks, such as  'Ik heb mijn borsten zien dikker worden' (I've Seen My Tits Grow Bigger), in which he mocked the beauty ideal of big bronzed breasts.

Around 1970, Boebbel and his rock band mate Guy Zak started to publish a magazine called  ‘Drifdlav‘  , which mainly consisted of comic strips and scraps.  After a while, Zak quitted and Boebbel decided to lead  ‘Drifdlav’  into a new direction.  The name of the magazine was first changed into  ‘Phlegm‘ and later on into  ‘ Boebbeltje ‘ .

Initially, the new magazine was a kind of fan magazine related to the performances and creations of  Boebbel . Eventually, ‘Boebbeltje’ grew into a full magazine with short stories and fairy tales, pseudo - scientific articles and fictional interviews, funny limericks and jokes, puzzles, drawings and comics. The last edition of  ‘Boebbeltje’ was published in november 1984.

Already at an early age, Boebbel started writing witty verses and funny rhymes, but later on he also composed  more poetic or even romantic poems.

Boebbel wrote a lot of short stories and fairy tales. Some of them were published in the magazine  ‘ Boebbeltje ‘ .

The most memorable fairy tales are :  ‘The Nutty Prince’ , ‘The Unhappy Testicle‘ , ‘Snorebrock and Mouseline‘ ,  ‘The Criple Musician‘ , and  ‘The Cranberry Picker’ .

‘In Pint We Trust‘  are the philosophical principles of a bacchanalian sect that he founded in the 1970's and disbanded in the 1980's.

‘Philosoph-IA‘  is a compilation of rather serious essays on various subjects, while ‘Memoirs of a Queen Tyrant‘ is a collection of letters with humorous reflections. 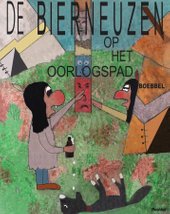 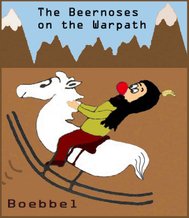 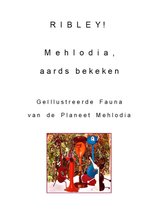 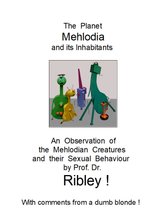 Boebbel published several comic strips in his magazines, e.g. ‘The Death of Luke‘ ,   ‘The Spitting Turdaboo and the Long Drop Loo‘ , ‘The Eventures of Pike and Puzy’, and  'The Beernoses on the Warpath' , an English version of  'De Bierneuzen op het oorlogspad'   .

Around 1990, Boebbel changed his name into Ribley!.  A few months later, he was contacted by an inhabitant of the planet Mehlodia.   According to the information he received, Ribley! portrayed some of the creatures of this planet by means of sculptures. He also wrote an encyclopedic catalogue with an observation of the Mehlodians and their sexual behaviour, called ‘ The Planet Mehlodia and its Inhabitants ‘ , an English version of  'Mehlodia, aards bekeken' .  It is completed with comments from a dumb blonde!

In 2020, an anthology of Boebbel's literary works was made, called  'Literaire Hoop' (Literary Heap).