Boebbel was a member of various bands and ensembles, of which the most important ones were  Boebbel , Zak & Boebbel , and Psychotone.

He wrote songs and music for all of these ensembles, and also composed works and studies for classical guitar, e.g. ' l'Uccello di Paradiso ' or 'Naked Impromptu' .

Being a real noseflute virtuoso , he even wrote music for this  peculiar instrument, e.g. the 'Concerto for Percushion and Noseflute in B'.

Zak & Boebbel were a unique Belgian duo of the early seventies, consisting of Guy Zak (bazak & percussion) and Dick Boebbel (percussion).  They could easily be called the progressive yet acoustic predecessors of techno.  They played exclusively on self-made acoustic instruments such as the  bazak  (a kind of contrabas with stretched springs) and the  zebkhak  (a drum set of cardboard soap boxes), of which the sounds were distorted while recording. Their music was an explosion of original rhythms and bizarre bass lines, and full of funny vocal interjections and percussive innovations. They only released one casette in a very limited edition: ‘Zak & Boebbel Live at Home' (1970), including four long tracks : ‘Dzemlaporc’, ‘Pivoplatat ’ , and ‘La Bamba 1&2’ .

After unsatisfactory experiments with various guest musicians and psychedelic rock bands like Vetbult and Fum, both musicians joined a jazzblues band called Oezem around 1972, respectively on bass and guitar, but about one year later Boebbel decided to start a solo career, while Zak directed Oezem into RIO music and avantgarde chamber rock. 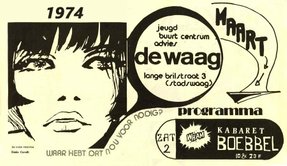 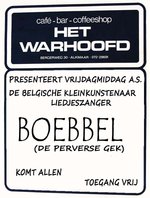 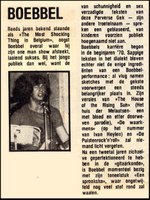 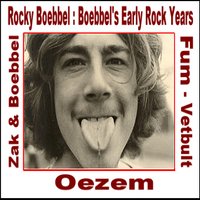 Boebbel decided to start a career as a solo rock comedy performer around 1973.   He turned himself into a truly remarkable one-man orchestra, performing songs, monologues, poetry, short plays and instrumentals in shows such as 'The Flying Turd' and 'Take me by the Hand to Fairy Tale Wonderland' .

He really had a very personal way of singing, which could be described as a peculiar mix of howling and growling.   His instrumental and vocal interventions such as alpenhorn solos, gurgle laughs, or electric bicycle seat wah-wah playing, were weird and unconventional.   And what to think about flamenco guitar, accompanied on castanets played at the same time by means  of strings around the wrist!

Sometimes he was accompanied by a backing group, e.g. Schroktepel (with Marc Van Hove on drums and  Dirk Bogaerts on guitar).

He accompanied himself on guitar or self-made instruments and assemblages such as the  Klopmöbel , an ever growing percussion stand of eventually about 30 small idiophones, among which the electric bicycle seat , and expanded with other percussion such as the boebbelophone , a tuned guiro set .  The Klopmöbel is constructed in such a way that the different instruments can be played simultaneously or in rapid succession as if it were a single instrument.  By means of an inventive tube construction, Boebbel was even able to do a percussion solo while at the same time playing up to 5 aerophones.

He also invented an appropriate notation that enables a percussionist to sight-read the music that he wrote for this instrument.

The people who saw him perform will never forget songs like   ‘The Impotent Phlegm’,  ‘Blond Theo’, ‘Pustule Rock'n Roll’, ‘House of the Lepers’, ‘The Chicken Screwer’,   ‘Embryo Blues’,  'The Flying Turd Song', ‘The Unrelenting Masturbator’, ‘The Workman’, or ‘Leave my Dick Alone’ …

Some tapes of bootleg quality from rehearsals and live performances are circulating around, so if you're lucky you just might pick up one of these recordings.  Some of the rehearsal tapes are just one long improvisation from the beginning till the end, as this was one of Boebbel's unorthodox ways of composing or constructing a song.

Because of the content of his songs, it often happened that one of his performances was stopped by local authorities.      Therefore he decided to concentrate exclusively on instrumental music: together with sax player Paul Van Laere, a companion member of The New Peppers, he founded an instrumental jazzrock band called Psychotone around 1980. 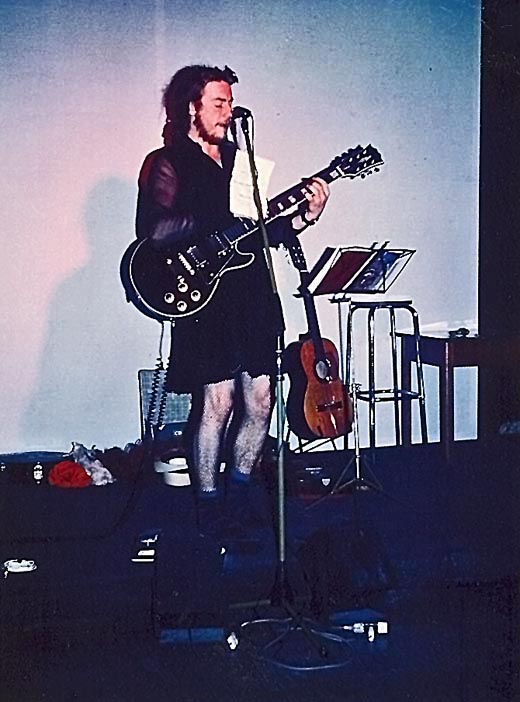 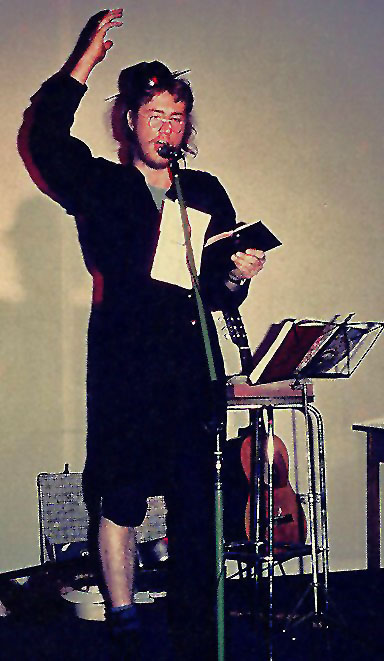 Rick Boebbel called in Gerry Liebens (sax), Mack Riské (bass), and Pat Riské (drums, percussion) to form Psychotone Too.  All the compositions were written  by Rick Boebbel himself, who also played a large assortment of instruments, such as guitar, bouzouki, altsax, trumpet, noseflute, percussion, and of course the klopmöbel .

The music that Boebbel wrote for this band could be described as instrumental ethno-jazzrock, abundantly peppered with weird and humorous interventions, such as puppetry intermezzos, noseflute quartets, boebbelophone solos and so on... , but the amazing complexity of the music made it almost impossible to play it live.  The suite ‘Cosmos-perma-cussion‘ e.g. featured no less than 120  different musical instruments!  Since the music was uncompromisingly uncommercial, no record company was interested in recording it either, while a private album release cost far too much.  After a few years, Rick Boebbel therefore decided to disband Psychotone Too, leaving behind some nice jazzrock pieces such as ‘Salmonella‘, ‘Genetic Blues‘, ‘Lintje’, ‘Hungarian Sonata‘, or the musical fairy tale 'Jessica and the Guitar Player‘ …  He withdrew from musical activities and started making humorous assemblage - sculptures under the pseudonym of Ribley! 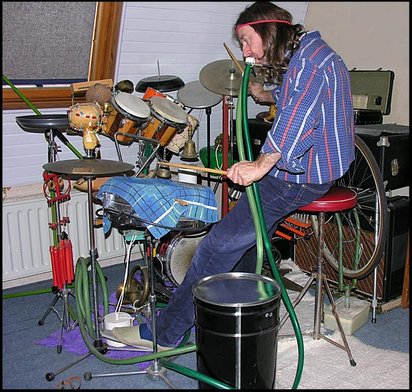